Ah, Las Vegas, a wonderful city. It can be a great place for a writer. So many different opportunities for observation and glimpses into the personas of others. I’ve seen the sun rise several times over Lake Mead, Lake Las Vegas and the strip at triathlon races and marathons. I’ve people watched at the strip and downtown while traversing around, frequenting the restaurants, gambling into the wee hours of the morning. I’ve stargazed with others deep into the night at Red Rock. I’ve gone to school here. Then, of course, there are my writing cronies and we can be in a whole category of interesting people ourselves. Las Vegas is a place where dreams can be made one day and broken the next. A place where if you have the money and/or the right connections your every wish can be met, your fantasies fulfilled, and even if you don’t have the big bank roll or connections, you can still pretty much live out your desires. So many chances to become immersed in fantasies. No, I’m not talking about going out of Clark County or calling up one of the many, um, “entertainment” businesses in the phone book. What I’m saying is, all you have to do is see a good show. Now, there’s the thing. What constitutes a good show?
That, my dear, is up to your personal taste.
I’ve had the chance to see quite a few. My favorite Cirque show is Zumanity (http://www.zumanity.com/en/default.aspx) I loved Phantom of the Opera (http://www.phantomlasvegas.com/) And, now my favorite male revue show is Chippendales (http://www.chippendales.com/index.php) Talk about fantasies…
But first, the audience. The first night we went, my friends (Kelly &  R.M. Sotera) and I were getting a show outside the theater. There are huge pictures on the outer walls that the women stood next to so “they could have a picture with the men.” 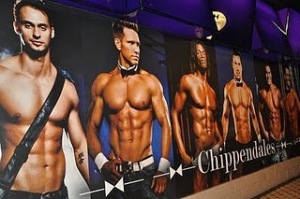 Would you drink it?
I was watching a couple shows on the Science channel (yes, I’m a geek) about time.  The first show dealt with black holes, the beginning of the universe and how black holes may not be the end but the beginning.  The second show discussed humans’ views on time and how we search for the key to immortality and/or an extension of life.  One scientist mentioned that in the next 30 to 50 years it may be possible to reverse the aging process, where 60 year olds can reverse the aging process and go back to being about 40 years of age.  Then in the 20 years or so that it takes them to get back to 60, more scientific breakthroughs will have occurred to assist in helping people live longer & as younger beings.  Of course the show also discussed the creation of a magic elixir allowing us to drink of the fountain of youth.  The host of the show asked people on the streets if they would drink the potion to have more time on the earth.  There were quite a few mixed reactions.  Some people said sure, that they enjoyed life.  Others said they’d miss friends and family. Me?  I’m undecided.  I think I would need to spend a week or two in absolute seclusion with my papers, pens and books before I made a choice.
It made me think though.  With the intense interest in paranormal stories where the characters are immortals, do we secretly long to experience endless time?  Would you drink from the fountain of youth?
Share your thoughts on immortality/life extension with me.

Calling all authors! Here’s a thought for you…
Come join EPIC and enter in its wonderful contest!
For details, visit: http://www.epicauthors.com/ebookawardrules2011.html
& don’t forget to make plans to attend the conference, too: http://www.epicon-conference.com/

Have you seen the commercial for the Zoosk dating site? http://www.youtube.com/watch?v=I61n_kkRRHA
I think it’s funny! & It also reminds me of the humor in a great book called Dirty Dancer that’s available at eXtasy Books.
I’d love to hear your thoughts on the video &/or book.

The following is the same forward as it is backwards: Was it a cat I saw

For those who watch soap operas ~

Ever wonder if the actors/actresses read the script and say, “You want me to say what? Just yesterday you had me hating the character and now you want me to tell them they’re the love of my life?”